By webmaster in Blog with 0 Comments

Loreto Pueblo Mágico in Baja Sur! Exciting news…..Loreto has received “Pueblo Magico” designation! After over two years of preparation, in a ceremony on June 5th, 2012 Loreto was added to the short list of cities designated by the Mexican Federal Secretary of Tourism as a “Pueblo Magico.” This will make Loreto only the second city after Todos Santos in Baja California Sur, to achieve this designation. This will entitle Loreto to annual federal funds to improve infrastructure, and will receive additional promotion.

To become a “Pueblo Mágico” is a recognition awarded by the Federal Secretary of Tourism to those localities that have managed to preserve the cultural and natural heritage on which rest their identity and sense of belonging.

Loreto has a vast cultural heritage as the site of one of the first missions settled in “Old California,” as a rural community that has preserved the essence of the early settlers, and has invaluable natural wealth manifested through a National Marine Park, and five islands in the Sea of Cortes declared as a “World Heritage” by UNESCO.

More information on the program of Pueblos Magicos visit

Link to a video here: www.youtube.com/watch?v=3Qb755mqLY8 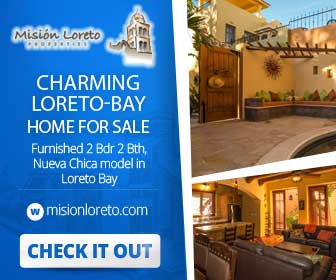